From start-up to family business

In 2008, Jonathan Miller started Element Bars. Since then we have new packaging, a new baking facility and have had to hire new employees. Here is video of newest bakery employee. Some may call it nepotism. . . . but we prefer to call it a family business. Here is our CEO's daughter packing bars:
Posted by Element Bars Staff at 9:00 AM No comments:

On Wednesday December 8th, inflamed appendixes (appendi?) threatened to ruin the football season of the Kansas City Chiefs and the holiday season of the Element Bars baking staff.
Chiefs quarterback, Matt Cassel and Element Bars baking manager, Chris, were rushed to separate hospitals in separate vehicles to have the same operations: emergency appendectomies. The similarities between the two situations are in a word: eerie. In two words: freakishly eerie. In three words: jaw droppingly amazing.
At the time, the Kansas City Chiefs were getting ready to play a game against their division rivals the San Diego Chargers. 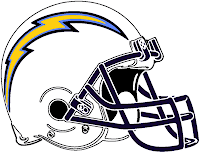 At Element Bars, we were charging to fulfill our holiday orders.

The Chiefs play at Arrowhead Stadium.

My friend Jeff once found an arrowhead. 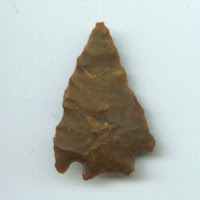 Chiefs' quarterback Matt Cassel did not start a game in his college career at USC. . . 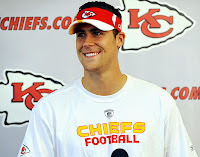 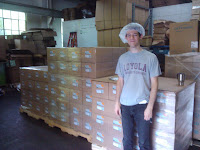 The Chiefs struggled in Cassel's absence. Replacement, Brodie Croyle, is not as good as Cassel.

Element Bars struggled in Chris's absence. Replacement, me, is simply not as good as Chris. 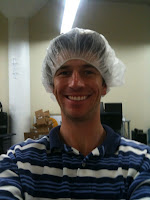 Well, I am happy to report that Cassel returned to the Chiefs yesterday and went 15 for 29 and threw a touchdown leading the Chiefs to a win over the Rams and happier to report Chris returned to the bakery today and is overseeing the baking, packaging and quality of all of our orders.
Welcome back Chris and Matt. Both of you are doing a great job.
Posted by Tom Doar at 1:07 PM No comments:

Our water cooler has been broken.

We did not panic initially because part of the culture at a start-up and spirit of a good entrepreneur is tackling the problems that arise with a smile on your face. 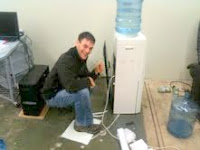 Jonathan Miller tackling a problem with a smile on his face

When smiles fade, good entrepreneurs and successful start-ups bury their heads into the problem. 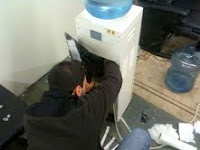 Jonathan Miller burying his head in the problem
When stumped, good entrepreneurs and successful start-ups look at the problem from another angle and continue to work to find a solution. 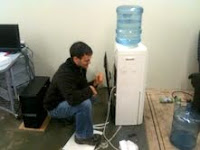 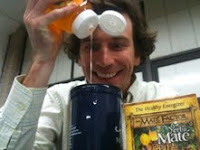 Tom Doar pouring honey into his mug after Jonathan Miller fixed the water cooler
I am proud to report our company's WCC is back on track and to answer the above questions:

"Yes I saw the game. Block somebody, I mean for real."

"I can't believe the two of them got together either.
Great writers on that show.
When that other guy comes out of a coma he is going to lose it."
Posted by Tom Doar at 2:36 PM No comments:

On Tuesday, the Element Bars crew (minus Chris) went to MidVentures Launch, a tech conference promoting midwest start-ups.
It was an okay day, but it would have been nice to have someone there who was smarter than me. As my buddy Confucius liked to say:
"Real Knowledge is to know the extent of one's ignorance" 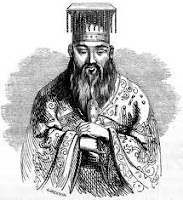 Well, I had no clue what anyone was saying or what was going on. I was more ignorant than anyone in attendence on topics pertaining to coding, programing language or routers --that is what Confucius and I call "real" knowledge.
Think Confucius was full of it? Well let me go ahead and quote Plato quoting Socrates: 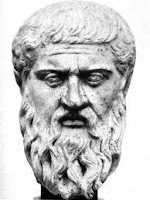 "At any rate it seems that I am wiser than he is to this small extent, that I do not think I know what I do not know."

BAM!!
That was from Plato's Apology and no, I will not apologize for pointing out the obvious: in a room of people who thought they were smart, I was the smartest. It was not only thinking I was the smartest it was knowing I am the smartest. I know I have no clue how the guys from i-Guide Robotics made a lawn mower drive itself. I know I could not tell you how revered "smart" guy Scott Jones invented voicemail or Cha-Cha. I know that I cannot fathom how much money Groupon's Brad Keywell made in the thirteen seconds he walked from the steps on the side of the stage to the podium. I do not think I know any of this, which makes me wiser.
"Yeah, but can you point to anyone who says this who goes by three names?" You ask:
"To know that we know what we know, and that we do not know what we do not know, that is true knowledge"
(I will pause to give you time to reread, that's a tough one)
Henry freaking David freaking Thoreau.

I guess it would be polite to thank midVentures for their well run conference and bringing everyone together in the midwest. While I am at it thank all the speakers and panelist who took the time to speak. Congratulations to Element Bars for finishing in the top 5 companies overall. But to close, I would like to quote the smartest guy at midVentures:
"What in the world is anyone here talking about? I literally have zero concept of what is going on." 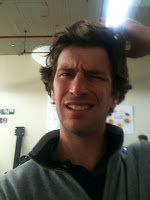 Tom Doar
Posted by Tom Doar at 1:22 PM No comments:

People often ask me to name my favorite Element Bar.

My answer: The one I have every day for breakfast.

For the past two years, I have had what I call "Quality Control Breakfast" to start my day. This meal consists of a cup of coffee I brew at home and an overrun custom bar I pick up from the bakery. Overrun bars are left over after our custom batches are mixed, baked, cut, wrapped and boxed. Not every batch has an overrun bar and almost all our overrun bars are not big enough to package as a full bar. While overrun bars are not as big as the bars we send to our customers they still provide a healthy start to the day and allow me to test the freshness and taste of the bars we are producing in the bakery.

I once read an interview with Jim Koch founder of The Boston Brewery brewer of Sam Adam’s Boston Lager and he said that he had “5 or 6 quality control beers a day!” Which had me thinking I was a lot healthier being in the bar business as opposed to the beer business.

Keep creating "your bar, your way" but if you are thinking of me and my breakfast, add one fruit and one nut to a chewy core and have the label say "Good Morning Jonathan".

Posted by Jonathan Miller at 2:48 PM No comments:

Last weekend I rode in the North Shore Century and got to enjoy a wonderful all day bike ride through Chicago's northern suburbs. I also got savagely sunburned despite slopping on sunscreen pre-race. One thing I didn't get, was hungry, thanks to Cherry Charge. I took two with me along with plenty of water and avoided the dreaded "bonk" that plagues dehydrated or glycogen depleted cyclists worldwide.
To be honest, I surprised myself by finishing as this was only my second time on a bike since May having broken my finger earlier this summer. Note to Element Bar-Blog readers: If you're considering breaking one of your fingers, take my advice and do not. It's not as fun as it sounds.
The next day, I was admittedly creaky but definitely not sore having eaten the high-protein Blueberry Repair bar after the ride.
Now, if only I could find some custom butt-pads...
Posted by Chris at 12:22 PM No comments:

All Hands On Deck (Another Day at Element Bars)

Judging by the number of letters/emails I have received saying “your blog changed my life”, “I sent this to all my friends” and “move over Hemingway” I don’t think I have a very wide readership. All the emails I have received of this variety have been sent from my personal email account. So, although I have blogged about “All Hands on Deck” days at Element Bars before, I think I might need to again.

At start-up companies, “All Hands on Deck” days are days which everyone in the company needs to stop what they are doing in order to help in another area of the company. These are great days because it means that there is a high demand for our product. At Element Bars “All Hands on Deck” days require help in the bakery. Last week after a call from the Big-Boss-Man, I threw my hair net on (which is quite an accomplishment because I am in desperate need of a haircut) and I set off for the bakery. 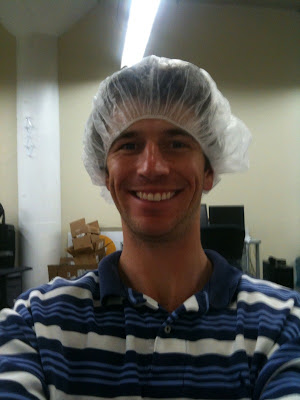 Due to the large number of orders we had to fulfill there were a bunch of bars that needed wrapping. When I arrived at the bakery, the unwrapped bars were sitting at the base of the flow-wrapper. A flow-wrapper is a machine that runs bars on a conveyor belt, wraps them in plastic and then heat seals the bags so they are still fresh when customers receive them. Our particular flow-wrapper has a conveyor belt, wrapping spool, cutter, sealer and temper. Fortunately, we have two Flow Wrapper Whisperers at Element Bars-Jonathan and Raul. These two guys can take even the wildest of flow wrappers and calm them down to help wrap bars. 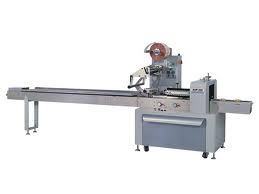 During the “All Hands on Deck” day last week, Jonathan was whispering to the machine, Chris was feeding bars and I had was having an epiphany—my freestyle rap name. Now, I have never freestyled because I worried I would be really fantastic. My fear was I would be freestyle rapping on my morning commute or while grocery shopping and a record producer or Rihanna would approach me and want to collaborate on a record. I would be enthusiastic about the prospects when the inevitable question would come up “so what is your stage name?” I wouldn’t have a name and the project would be shelved. But now, thanks to Element Bars and the demand for our product I can rap freely because I have a freestyle rap name, Flo Rapper.